Opening day – the day every baseball fan anxiously awaits each spring. This year, Hostess decided to pay tribute to the beloved “holiday” with a tweet.

In case you missed it, it looked something like this: 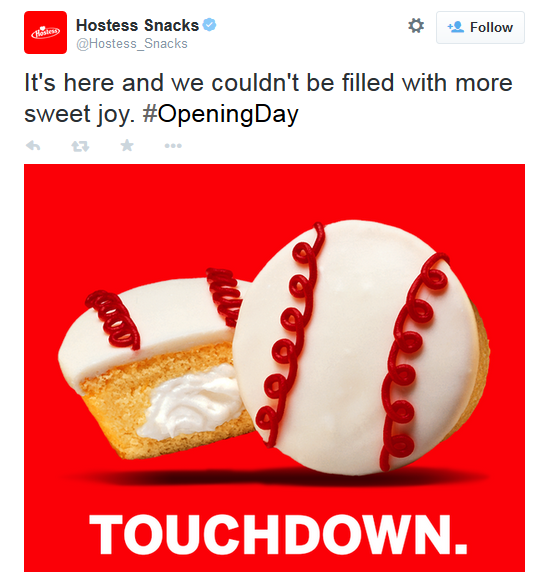 Your first reaction was probably that Hostess got its sports mixed up. Judging by the hundreds of replies this tweet received, the majority of people were right there with you. But was this really an innocent mistake on behalf of Hostess, or was it a slice of marketing genius? My guess is the latter. With a whopping 1,400-plus retweets, 940-plus favorites, and more replies than we can count, this tweet really knocked it out of the park. As a comparison, a typical tweet from the company receives less than 50 retweets, favorites, and replies.

Hostess proves that it’s OK to be silly on social media and show your sense of humor. If the popular sweet treats company had used this same photograph with a caption of “homerun” do you think it would have had the success that it did? Probably not.

Instead, Hostess took a risk and it paid off. Some might argue that this is an epic fail, making the company look unintelligent. My personal opinion: it’s far too obvious to have been an error. It was simply a marketing tool to get a reaction out of readers and cause a stir. If that was the case, it worked just as planned.

Go ahead, take risks on social media. It’s the one platform that you’re allowed to be goofy and show your brand’s personality. Give your readers a laugh, they’ll love you for it.

What do you think of Hostess’s tweet: was it a “touchdown” or an epic fail? Let us know in the comments.