Bernie Sanders may not have clinched the Democratic nomination, but his content marketing strategy was a winner.

As of this date, Bernie Sanders still isn’t conceding the nomination, but it’s unlikely he’ll be the frontrunner of his party going forward. Still, many would agree that Sanders’ efforts to “transform the Democratic party” have been realized in more ways than one. Issues that are central to working Americans but typically receive minimal attention, like income inequality and minimum wage, have energized the party thanks to Sanders, and his success with small donors—his average donation was $27—may be a game changer for future political campaigns. Whether you agree with his policies or not, it’s hard to deny that the effects of his campaign won’t be forgotten anytime soon, which is not a small feat in the political arena.

Political campaigns are run like mini businesses, using many of the same strategies to draw people in and close the deal: They use big data to run targeted ads, focus groups to reveal the prevailing winds of public opinion, and a brand structure—Republican or Democrat—to guide marketing messages. What’s missing from most political campaigns, however, is the strategic use of content marketing.

Content marketing attracts and engages people by offering valuable content. Yet most of the messaging being delivered by the candidates is merely entertaining (see Hillary Clinton’s Pinterest page for granddaughter gift ideas—great!—and Donald Trump’s epic tweets—“Look, it’s crooked Hillary again!”), not high in value. That kind of content won’t make a difference in the long run.

Content marketing is a long-term strategy, not a short-term campaign. It works in two ways: 1) by being authoritative and educational, and 2) by conveying genuineness.

Bernie Sanders’ strategy has achieved both of these things. His online news journal, Democracy Daily, publishes brief articles from other news outlets relevant to his key campaign issues. While these articles need to be taken in context (a Democratic one), they do provide real information about the challenges our country faces. Do enough Americans really know about the deficit or economic growth drivers, or are we all operating under our own set of realities? They also clearly position Sanders and his beliefs and values, and serve to draw those with similar views—who will hopefully spread the message—to him.

Good content is also genuine. The Washington Post reported that Sanders “always said he was trying to win that nomination, but in his early interviews in the race, what stood out was his passion for his ideas.” Nomination or not, Sanders was a man on a mission—he had a brand story to share, and wanted to bring as many people on board with it as possible.

He also takes an active role in creating his own content, once telling the New York Times that he comes up with most of his new ideas in the shower! That genuineness is clearly attractive: His Facebook posts attract tens of thousands of likes and shares, and nine of the top 10 most-liked Instagram posts of the election belong to Sanders (the tenth was Trump’s).  Also, according to a recent study by social media analytics platform Captiv8, which gathered and analyzed social media data from mid-May 2015 to mid-February 2016, Sanders had the most engaged audience of any candidate. 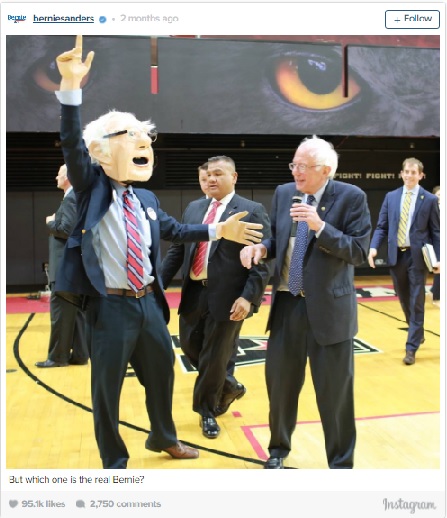 Even now, his advisors say that his goal is to make the party platform reflect as many of his ideas as possible, like universal health care and free public college, which means he has more marketing work to do in the days ahead. As Sanders continues to champion his brand, awareness of it and engagement in it will continue to grow—a content marketing success in any context.

Meredith DeSousa is a Content Producer and Quality Control Editor for Content Boost, the content marketing division of TMC. Tasked with creating and editing custom copy for clients, she is also a regular contributor to our corporate website. Prior to joining Content Boost, Meredith spent 15 years in the editorial departments of various book publishing companies, including Scholastic Library, Taunton Press, and Simon & Schuster, as an editor and copyeditor. She also worked briefly in the field of education as a library media specialist. When she’s not writing or editing, Meredith loves traveling, reading, and watching (or making!) movies—a byproduct of her undergraduate degree in broadcast communications from Pennsylvania State University.