Being a resident of Fairfield County has its perks. There are some beautiful beaches, a rich colonial culture and of course an endless list of great dining options. And, as I found out yesterday, even the daily bumper-to-bumper traffic on the I-95 corridor between Norwalk and Bridgeport comes with a silver lining.

As I sat in crippling traffic, wondering what life would be like while navigating rush hour in an automatic vehicle, I tuned into 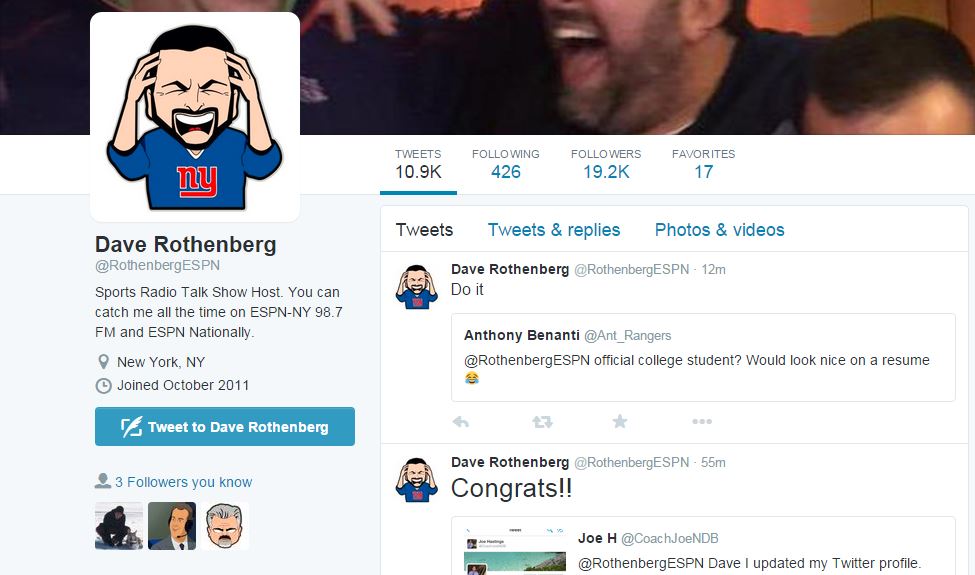 my favorite sports talk station, 98.7 ESPN radio. Although I was a little annoyed with ESPN New York for seemingly overlooking the Jets’ 31-10 week 1 victory over the Cleveland Browns—instead opting to dissect Eli Manning 4th quarter brain cramp—I was pleased to find I had caught the Dave Rothenberg Show.

And, as a content marketer, I was even more pleased at the segment I had tuned in to catch.

During his Sept. 17 show, Rothenberg gave his fans what no other ESPN radio host (to my knowledge) has: Twitter rights to the “official (insert noun) of the Dave Rothenberg Show on 98.7 ESPN radio.” The catch? That fan’s update their Twitter profiles to reflect their new titles.

Although Rothenberg has said he will eventually release an official list of his new … well, officials, here are a few highlights from Rothenberg’s Twitter feed as of noon today:

As this list continues to grow, and no doubt it will, we wanted to add one more to the list of “officials” before Rothenberg puts out that final round-up. Today, we’re proud to announce (as per the update in our Twitter profile) that Content Boost is the official Content Marketing Agency of the Dave Rothenberg show on 98.7 ESPN Radio.

So, next time you need help with a blog, show notes or anything to do with words, let us know, Dave. We’ll be waiting.

At 12-years-old, Salvatore Trifilio scored in the 99thpercentile on a New Jersey standardized test in the category of “reading, writing and comprehension.” It was all she wrote, so to speak. Over the next 11 years (and counting) Sal has made writing a central part of his personal and professional lives. When not writing, Sal enjoys watching and talking sports, riding his skateboard down by the beach and jamming out to punk rock music. Most recently he has worked at “The Daily Voice” and “The Suburban News,” and has been published in the Contagious Optimism series for his piece on the Boston Marathon bombings. Sal holds a Bachelor’s Degree in English/Journalism from Fairfield University, where he also minored in Philosophy. He’s also extremely Italian, if his name didn’t already give that away. Follow him@SalTrifilio