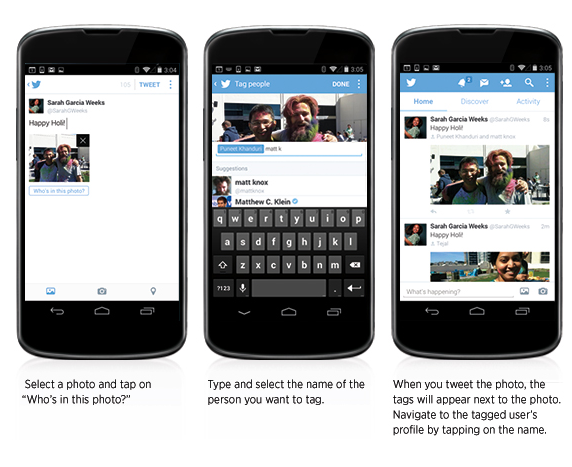 Conversely, I like the social platform because of its simple nature and the fact that it isn’t overly sensationalized or complicated with unnecessary features. I like the fact that every user only has 140 characters to express his or her sentiments. I like Twitter because it aggregates and disseminates news from different sources and brands that I love. To me, Twitter has first and foremost always been about bringing share-worthy news right to your digital doorstep—news that matters and hashtags that represent what’s going on in the world in real-time.

I think a large part of Twitter’s success has been its ability to avoid capitalizing on being “people-centric” like other platforms (a.k.a. Facebook). This element gave the platform a sense of discretion and professionalism as opposed to just being a public networking forum.

And that’s the exact reason I don’t like this photo tagging feature; it robs Twitter of this exclusiveness. It dulls the platform’s competitive differentiator. I fear for the future of Twitter with this new capability on the table because it makes every user susceptible to potentially negative publicity that they may not want and have no say in whatsoever.

So now that I’ve aired out the personal reasons for my distaste for this new feature, allow me to delve into some more granular details about this capability. If you’re not entirely sure what this new feature encompasses or who it will affect, then you’ll definitely want to keep reading. Then, decide for yourself whether this gets under your skin, too.

Does photo tagging count towards your 140 character limit? No. This means that you can add all four pictures, with tags, and still get to include your regular 140-character tweet.

Will users get notified when they are tagged in a photo? Yes. If you get tagged in a tweet you will receive a notification similar to as if someone were to favorite or retweet you.

“Tagging people in a picture makes conversations around photos fun and easy,” Twitter explained in its blog. While that’s true, there is still a level of reputability that’s being taken away from Twitter because of this. Think about the many social media managers, marketers, journalists and more who use the platform for work-related purposes—not to mention what damage this could do to company brands. This will undoubtedly shake up companies’ content marketing and brand strategies as they figure out how to work around this potentially disruptive and rendering new feature. Think about it: one angry customer can tag a company in a controversial picture in an instant.

But I very well could be wrong. What do you think? Is this the best news you’ve heard from Twitter in a while or is this a road that the company will ultimately regret traveling down?  Let us know in the comments section below.